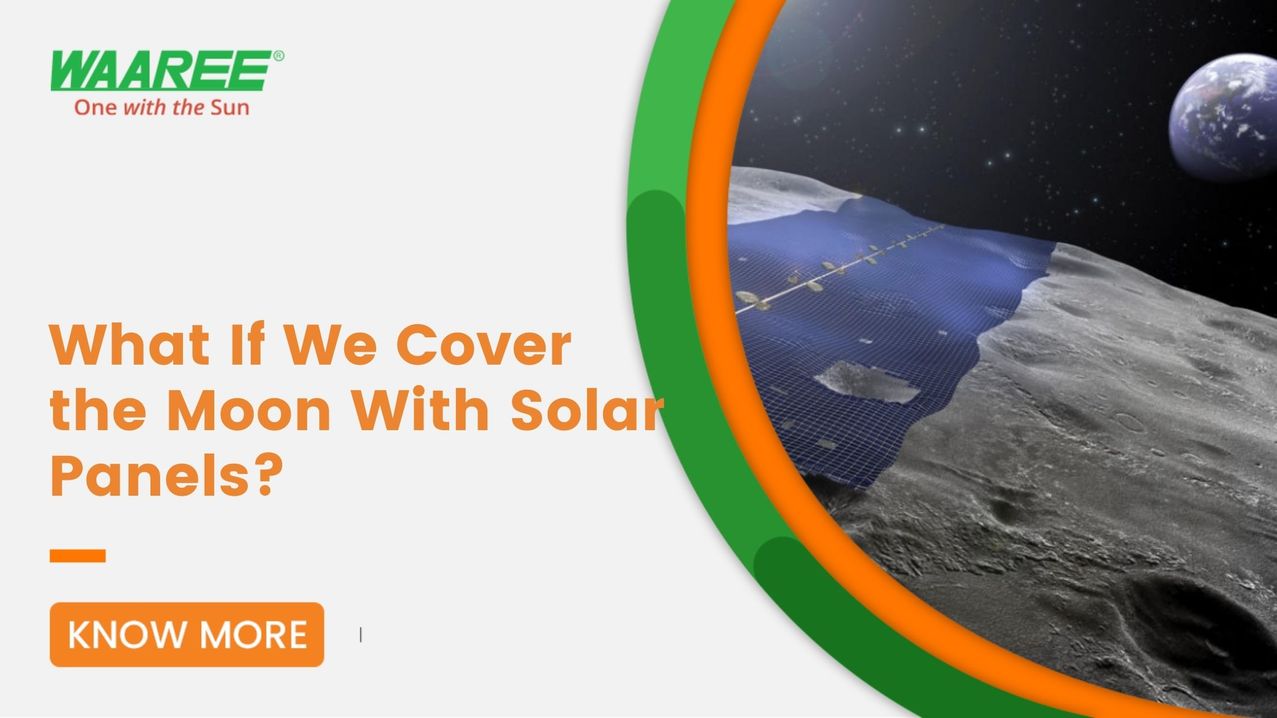 What If We Cover the Moon With Solar Panels?

With every passing day, more and more people are installing solar panel systems for their houses. Also, homeowners everywhere take advantage of the significant money savings that can evolve with a domestic solar panel system, and doing their bit for the ecosystem is always a transcendent benefit.

However, what happens during the night or when the sun isn't glowing brightly on the solar panels? Can the moon power a solar panel? Or are there any solar panels on the moon?

Solar panel systems rely on natural sunlight to generate power, and this natural sunlight comprises numerous different particles. The most significant bit for solar energy is the 'photon' when these photons from the sunlight get flashed to solar panels, the electrons situated inside the solar panel charge and build a valuable power current.

Also, when the sun sets, the electrons no longer remain exposed to sunlight and will not power to generate any electricity. On the other hand, the moon does not produce its light like the sun, and the reason why the moon lights up is that the sun's illuminated heat bounces off the moon's exterior area, thus producing the moon to glow.

In addition, the moon generates no photons and none of its light, so, unfortunately, it cannot power solar panel systems. If you install a solar system on the moon, it will generate power from the sun's light only during the night hours as the sun can light up the moon only when it gets set.

How much power does a solar panel generate at night?

Many people usually think that moonshine is merely daylight bounced off of the moon. However, you will be delighted to discover that solar panel systems do technically operate with moonlight. Nevertheless, the power produced by the solar panel system at night, even when the moon shines bright on them with no cloud coverage, will remain pretty minimal.

Also, on a cloudless evening with a full moon, you should barely anticipate 0.3% of the power generation that you would encounter in direct sunlight. That implies that if your solar panel system usually generates 300 watts of energy during the daytime, it will solely produce approximately one watt of indirect, total moonlight.

This is not even close to the quantity of power needed to operate an ultra-efficient LED light bulb, and you would require about 18 times more light to work one lantern with an LED bulb. And this is when it is full moonlight. In addition, for the rest of every moon period, the solar panel systems will generate even less power from moonlight.

Also, there is another challenging factor when answering the question; how does the moon power a solar panel, or is it possible to install a solar system on the moon?

Many home solar panel systems will get into "sleep mode" at midnight. It implies that they never remain actively involved in generating electricity. In addition, a solar panel inverter may deactivate if the solar panels produce such a smaller quantity of power. In other terms, the power levels produced by the solar panels at night are exceedingly low for most solar systems to bother with.

See also: How Many Solar Panels are required to mine a Bitcoin?

How does a home get powered at night?

After glancing at the above points, you may be thinking about how your home gets power at night. There are two standard solutions to this problem, and the initial one is solar power battery storage systems. If you get a solar battery installed as part of your household solar power unit, you can collect the excess energy produced by your solar panel systems during the daytime to use it at night.

Also, some solar panel batteries even allow homeowners to run off-grid totally, cutting their bonds with the traditional service company. In addition, there are numerous diverse forms and types of solar batteries for house use, and too many to jump into here.

Moreover, when buying a solar panel battery, pay close consideration to the energy capacity given by every solar panel battery. Pick one that gives enough electricity to power your home and avoid spending bucks on a solar battery that saves more power than your house utilizes.

In addition, the other method to power a solar panel roof at night is by utilizing net metering, a billing approach that has grown increasingly prevalent across the globe. Also, with the help of net metering, homeowners would not need to have their power storage capacities at home. Instead, you can transport the excess power generated by your house solar panel system every day into the solar grid.

In exchange, your utility firm will provide you with power credits. Then, once darkness befalls and your solar panel system stops generating significant amounts of power, you can transfer those credits for electricity from the network.

Apart from this, net metering makes powering your place with solar energy effortless and principally eradicates the requirement for a solar panel battery. Also, in the present times, most households have net metering laws that need service providers to present net metering alternatives for solar clients.

To sum up, we can say that even if you cover the moon with solar panels, it will not generate a considerable amount of energy. However, there are numerous companies across the globe working on creating lunar power plants that would convey solar energy to the energy-converting facilities.

If you are looking for an expert company to install solar panels at your home or office, Waaree can be your perfect partner.

Waaree solar holds a pre-eminent title in the solar manufacturing industry that you can readily choose to get the most effective and high-grade solar-related solutions. In addition, the experts at this company can further help you with all your solar installation, repair and maintenance.

Also, the principal aim of Waaree Solar is to create products that expedite and lighten the customers' lives without burning a hole in their pockets. To learn more about Waaree solar products, call us at 022 - 66444444 or email us at waaree@waaree.com.

Read further: What Should Be The Best Angle For A Solar Panel Installation?