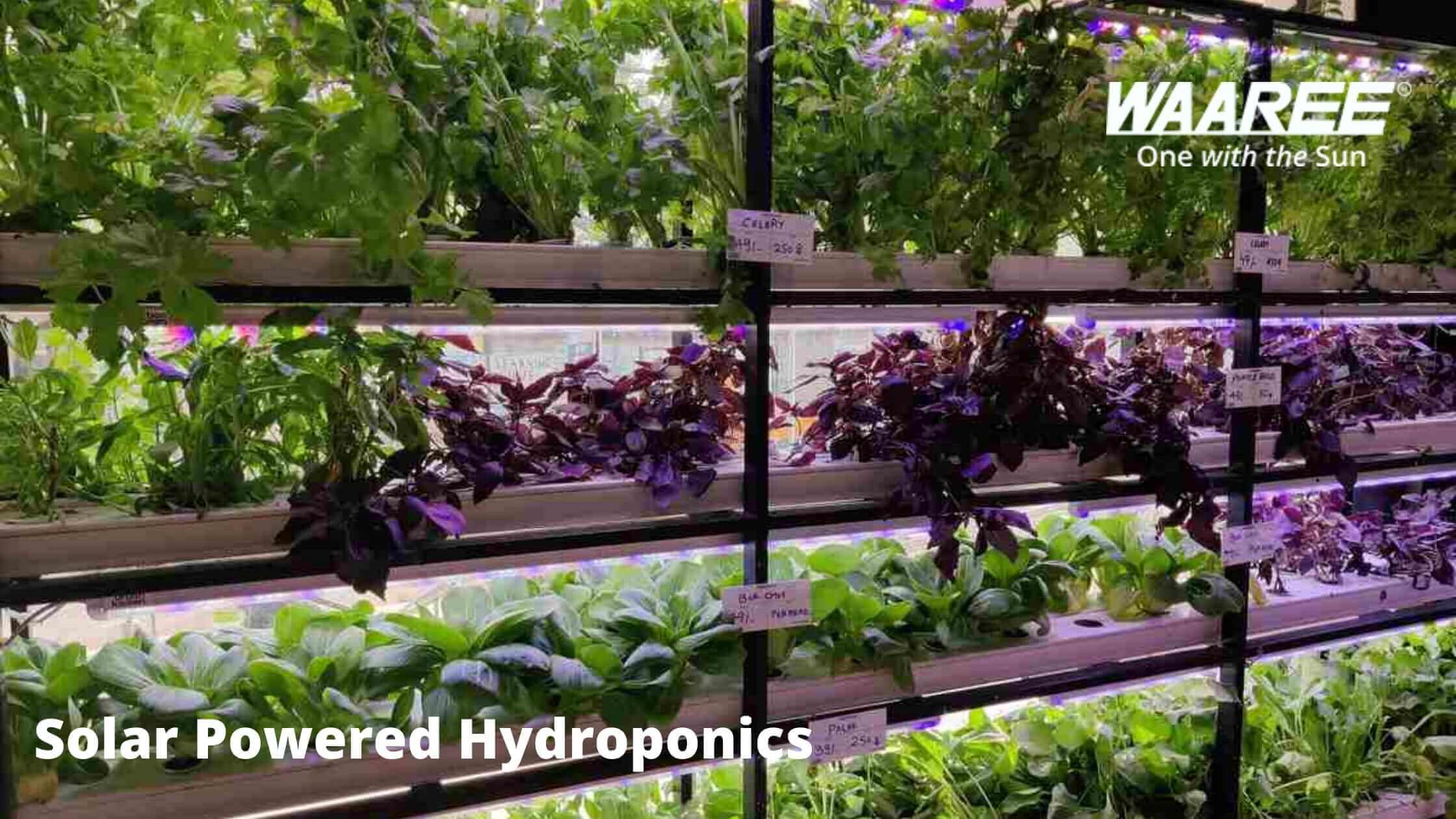 A solar hydroponics system is an agricultural procedure in which water with abundant nutrients is utilized to procure nourishment and growth for the plants. With the help of this technique, plants can be grown without the involvement of soil. This system is based on the contemporary methods of growing plants and is a worldwide tool used for maturing flowers and vegetables.

Expansion of solar hydroponics is very beneficial for the culmination of this entire system. It is an energy-efficient, environment-friendly technique to grow vegetables and other plants. Solar powered hydroponics use natural sunlight to formulate energy, which is infinitely better than LEDs or electric supplies.


How does the solar hydroponics system work?

In the solar powered hydroponics system, power is converted from the radiation formulated by nuclear fusion in the sun. It produces a large amount of energy, and is generated with the installation of huge panel plates.

The solar powered hydroponics system is based on the Photovoltaic effect. It is a process where solar energy is converted into electricity using solar cells (energy packets).

Solar panels are oriented at specific angles to ensure the rays fall directly on the panels. This system detects the temperature, humidity, pH level, and light autonomously via each sensor present in it. Any wastage of fertilizer water can be controlled through this method.

The principles of the solar powered hydroponics system are increased oxygen in the plant roots and liquid food directly provided to plant roots. These factors elevate the growth rates of plants and heighten crop yielding.

What does solar hydroponics mean for resilience?

Solar energy technologies can play a significant role in bolstering our power system’s resilience. Two major traits can create solar and extraordinary support for resilience. The initial idea is that solar generation can be disseminated, as obstructed to consolidate.

This means private buildings can host their solar systems to confront some or all of their energy demands. Neighborhoods can incorporate solar with warehouses and other techniques to establish a micro-grid that will deliver power to momentous infrastructure whenever it is required.

Ample electric power is produced in enormous, centralized power plants. Later, they transmit the electricity to residences and industries through power lines. This power can be disturbed if the transmission or dispersion system gets destroyed.

Distributed generation in assortment with regional energy warehouses allows power to be generated locally, near the consumers and could be utilized even if the centralized system experiences any disruption.

The following feature that gives rise to solar energy, a crucial supporter of resilience, is that sunlight-generated electricity can be stocked and released without the demand for energy labor, unlike traditional diesel generators, which are the largely widespread basis of accident backup power. In the long run, solar and its associated energy repository can transmit power, even at night-time, to residences and industries.

Farmers can have cumulative supervision over a hydroponic system. They are prepared to regulate pH levels and nutrients. It is to make sure that the plants receive the precise nutrients they require. The systems are fastened and convert the unused water by plants. The capacity to accumulate indoors allows planters to regulate temperature and lighting plans to enhance plant output.

Why is it efficient?

The hydroponic system is efficient because there is maximum use of water, and the output is more nutritious. It helps grow crops without the use of soil. The fluid is fed directly into the plant roots, which helps develop the ionic and inorganic forms of nutrition. It is a more rapid and better method of growing crops than the conventional form of farming.

Expansion of solar powered solar hydroponics is very beneficial for the culmination of this entire system. It is an energy-efficient, environment-friendly technique to grow vegetables and other plants. Solar powered hydroponics use natural sunlight to formulate energy, which is better than LEDs or electric supplies.

Waaree Energies Ltd. is present at over 350 places in the United States and 68 countries worldwide. Our goal is to provide high-quality, cost-effective renewable power resources to all fields, addressing climate change and opening the way for sustainable energy, raising the current and projected human standard of life. If you are a farmer looking for a better means to grow your crops, reach out today.