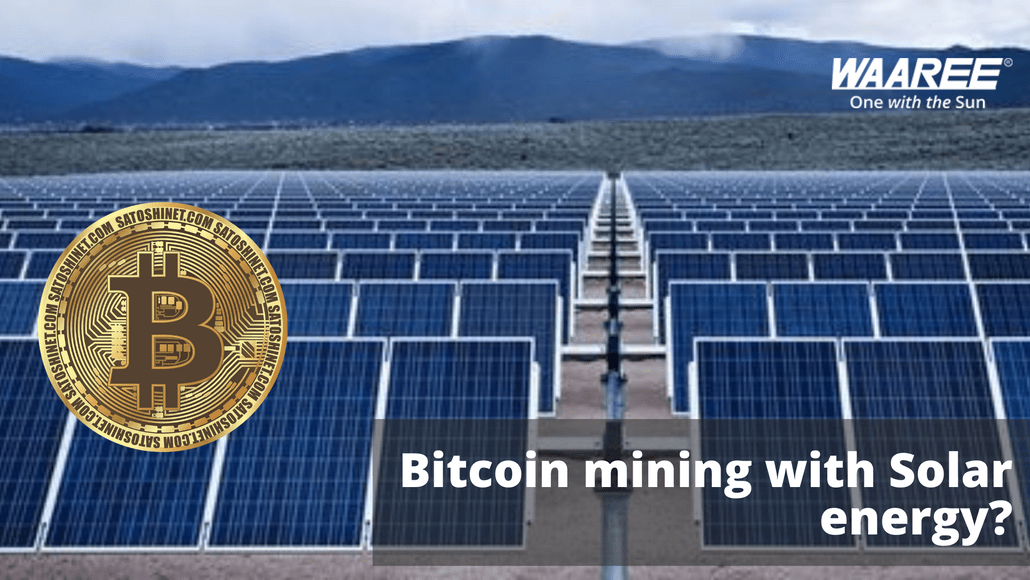 How Many Solar Panels are required to mine a Bitcoin?

You must be familiar with bitcoin investment these days. But do you know you can actually mine bitcoin while contributing to sustainability and green energy too? If this sounds new to you, you are in the right place. Using solar panels to mine cryptocurrency has been made possible for a while and it’s already driving everyone crazy!

However, the majority of the section of our society still remains skeptical about cryptocurrency. On top of that, people might be investing in solar panels at their homes or offices but they aren’t aware of using them for generating bitcoin. That’s why we have come up with a quick guide on the essentials of solar-powered bitcoin mining.

How much energy does it take to mine bitcoin?

Now, when we talk about solar bitcoin mining, the first question arises- how much energy would it actually take to mine bitcoin?

The short and precise answer to this would be, for running multiple GPUs for mining bitcoin, you would require approximately 6000 watts of solar panels to run a bitcoin mining rig during the day. It also includes charging batteries in the daytime to mine bitcoin at night. This equates to 20 x 300-watt solar panels, so you will need a 500mAh battery bank for running when sun rays aren't available due to weather and time.

Also, here is the energy requirement cost for generating 1 bitcoin a day:

As it takes around 1,544 kWh energy to create 1 bitcoin according to Digiconomist’s Bitcoin Energy Consumption, the cost of generating 1 bitcoin would be as follows.

The average cost of US energy = 13 cents per kWh.

Can you mine bitcoin with solar power?

Yes, it is entirely possible to mine cryptocurrency out of solar power. Furthermore, it can prove significant to the feasibility of Block chain-related activities, including solar-powered bitcoin mining.

Many people across the world enjoy security and power independence with the help of battery systems and solar power. Meanwhile, cryptography provides a means of ensuring the digital currency system’s security and freedom. That’s why solar bitcoin mining is emerging to be the next big thing worldwide.

How many solar panels do I need to mine bitcoin from solar?

Once we know about the energy and cost requirements, it all boils down to the solar panel system itself. To estimate the number and approximate dimensions of the solar panels, let’s take the following example:

In most parts of the United States, you can generate up to 5.5 kWh/m2/day from solar energy if it is an ordinary sunny day.

However, you will need multiple GPUs to generate profit. Therefore one can estimate that you would require approximately 3–6 square meter panels. Remember, this power is only for running the system.

In case it's nighttime or cloudy weather, you would need power storage too. Thus, more surfaces would be required to generate that extra power, providing you unspent power for storage, assuming you get 11 hours of sun per day. So doubling up the solar panels for extra energy will require approximately 6–12 square meters of panels and decent power storage.

Have you read: How Many Watts in a Kilowatt?

Bitcoin mining through the solar panels

To proceed with bitcoin mining, you would need a hardware setup known as a solar bitcoin mining rig. It is usually a low voltage device that is used and can directly connect to a fuse with the help of a battery. Now, the fuse has to be large enough to withstand a power surge of up to 150A required to run the unit.

You require solar panels of about 6000W energy to build a solar miner. These solar panels would serve the purpose of supplying the power and generating extra power to store in the battery for nighttime use and cloudy days.

You will also need a voltage regulator to charge batteries and a heavy-duty fuse as mentioned above. Also, do not forget to calculate the battery storage so that the miner can work even when it gets dark. If you have an off-grid solar panel system, be prepared for the worst scenario during continuous cloudy days. Therefore, you would require a proper nano-design in the case of off-grid systems.

Solar-powered bitcoin mining sees an immense scope in the next coming years. Sustainable energy coupled with digital currency security and freedom is the need of the modern era. Moving towards solar bitcoin mining isn’t just a brilliant way to profit from solar energy – it is also an effective way to embrace environmentally friendly energy and digital currency.

Although various methods are used to mine bitcoin, solar energy has rarely been considered up to date. Major mining houses use hydro or geothermal powering facilities to mine. Using solar power for mining cryptocurrency could also be a profit increasing turnout.

However, for utmost benefits, it's always necessary to have reliable systems. That’s why at Waaree, we provide the best quality solar panel and EPC solutions with global standards.

We aim towards a greener and sustainable India shortly by our effective, sustainable solutions and reducing the carbon footprint. If you are looking forward to a change, join our hands towards a better India by trusting our products and services.

Read further: Science Of Solar: How Does It Work?